All for the want of a nail

A famous nursery rhyme (at least in England) came to mind when I found myself riding without a bolt on the panier frame on my bike. The load metallic sound that came with every bump made me think my entire bike was falling apart, but it wasn't anything too terrible, as you can see. One new bolt later, and I was back on the road. 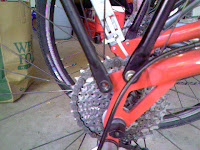 I'm not familar with the term "panier frame," however.

In fact, when I entered the term into Google, your blog came up sixth!

Of course - it should be spelt panNier frame (with two Ns)!