Another season of cycling seems to have come to a close. In anticipation of one last ride this morning in temperatures below 40 degrees (F), I bought a cyclists balaclava (to fit under my helmet). Perhaps I should have suffered the cold (out! damned superstition!), because this morning the weather forecast had changed from a cold but clear morning to one with a likelihood of snow/rain. We called off our ride, and indeed by the time the temps were above freezing the snow had started. I have some small hope of one or two more rides this year, but those hopes are fading.

On the work front, this week I have a fun video to share for those interested in what is happening in the world of virtual goods. (What, don't all leave now.) One of the Sigma investments is in Viximo, who produced this video to encourage artists to join the company's creators community and earn a chance of fame and fortune. 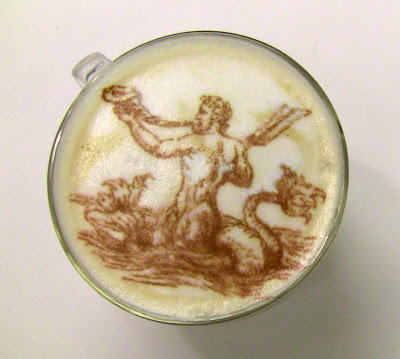 In another area of high-tech brilliance (not one in which we have invested, but which allows me include the food tag for this posting), let me introduce OnLatte. This company has modified ink-jet printer heads to use caramelized sugar to print detailed designs (logos, words, pictures) on Latte foam, and yes, even beer foam. I have seen it work.

Also on a food related topic, Anna Lappe (of the Small Planet Institute) suggests to President-elect Obama that he "create a Food Corps, modeled after the Peace Corps, that would inspire and support a generation of young people to dedicate a year or two of their lives to engage with ending needless hunger in a country of plenty and the squandering of fossil fuels, water, soil, and other precious resources through chemical agriculture. " This is part of Grist's series asking a cohort of sustainable food and agriculture activists to present elevator pitches for the new administration.
Posted Sunday, November 30, 2008