Slow food is supposed to be a virtue (the opposite of fast food)... so perhaps a slow start to the cycling season is not too terrible. I got out just once last week for a nine-mile ride on the Carriage Lane in Newton. I may, in fact, be ahead of last year at this time, but I am not feeling patient with myself and am feeling out of shape and looking forward to more regular riding. I have been on a new exercise regimen recently (thanks to Adam Poock) and am developing some strength in my hips, core and shoulders. I am hoping the hips and core work will pay off with better hill-climbing, but the first couple of outings this year have been overshadowed by lower general stamina than I remember from the end of last summer. Oh well!

My bike chain seems to have survived its cleaning however, although my trusty Garmin Edge 305 did not keep its charge last week... however it recharged for a long time so I hope it is back to good behaviour on my next outing.

A couple of new friends have signed up for the 2008 New York Hazon ride ... please take a look and consider doing so yourself. I am happy to answer any questions - just leave a comment or send me an email.
Posted Tuesday, April 29, 2008 1 comments

This is completely incomprehensible humor, unless you get it in which case it is hilarious. Sorry.

Attempt to explain cartoon: Perl has been my favorite computer language for years. LISP is a Cleanie programing language; Perl is a Scruffy programing language. 'nuf said. (More on scruffy vs cleanie here and here).
Posted Monday, April 28, 2008 1 comments

I just found out that the last two competitors on the cable TV show "Top Chef" are Richard and Dale. Last week I seemed to be among the earliest folks to find out that Posh and Beck (David and Victoria Beckham) are sending their kid to a Jewish school in LA. Amusing... but how did I find out?

The answer is Twitter. Twitter is a micro-blogging service which is just a little more than a year old. This - Venture Cyclist - is a blog. Twitter is a blog insofar as you can only post text messages of up to 140 characters (yes, characters, not words). This is limit was set by thinking about using regular cell-phone text (SMS) to post messages. In fact, you can even receive other people's posts by regular text messages to your cell-phone as well. With this focus, Twitter encourages people to send updates from wherever they are at various times during the day. You can choose to follow the postings - or tweets - of as many people as you like. Although most twitterers tweet in public, a twitterer can choose to make their tweets private, only visible to people for whom they have granted permission.

You can see my twitter updates in the frame of my blog website. If you are reading this in a blog reader then click here to see. These updates are not very edifying, and I have not worked out a useful reason for me to be twittering. Some folks "broadcast" special events on their twitter-stream - like a running commentary - perhaps from a conference, a sports event, or even a family wedding. There is definitely an on-going discussion about how tweets and FaceBook status updates might seriously compete for attention.

However, reading twitter streams is intriguing. As well as the "Hi, I'm awake" tweets, many folks share "ooo, look at that" moments, as they hear or see interesting items. I have found a few seriously interesting things online, and news organizations from the BBC to CNN to JTA now tweet important breaking news stories to which you can subscribe (follow) as well. Following Twitter streams can be like the news crawl at the bottom of the TV news show, but Tweets can include links to websites for the backstory.

Is this all a passing fad? I think not. Is the usefulness of this well-established? Not by a long-shot. Will there be a killer-app for Twitter (a compelling reason to post or read)? Yes, I think there will be.

One last note ... I have set up Twitter to operate in an IM (instant message, or internet chat) window. This interface seems to allow a special capability called "tracking". I can write in "track Richard Dale" and if anyone, anywhere on Twitter, posts something with my name, it shows up. I have chosen to track my own name, and several excited fans noted the Top Chef results last night on their tweets, and so I get to see that. Similarly I have chosen to track "Jewish" just to see what people are saying on that topic, and several folks posted the "Posh and Beck to send kid to Jewish school" item.

Despite Wikipedia's desire to be a Cleanie endeavor (background on Scruffies vs Cleanies here), it is inherently Scruffy. I am amused, bemused, and then slightly annoyed at reading about "The battle for Wikipedia's soul" in the Economist last month (article here). There are certain ideals to which Wikipedia can rightly aspire: accuracy, concise representation of existing knowledge, and so forth. Deciding which knowledge is "worthy of" inclusion when housed in a medium of infinite capacity should not be one of them.

There is nothing more Scruffy than harnessing the power of everyone (known as crowd-sourcing, a term even newer than Wikipedia itself). Trying to get all hissy (sorry, Cleanie) about what knowledge is "serious" is patronising at best, stultifying in any event, and censorious at worst.

Just because Scruffy is the "opposite" of Cleany does not mean Scruffiness is the same as dirtier or less ideal. Scruffiness, in this case, is the idea that putting things together in a haphazard way, and iterating when needed, often leads to better results than "over-thinking" an initiative and trying to design it perfectly from first principles before commencing. Recent research shows that people with tidy desks spend more time looking for stuff than people with mess desks - I have a messy desk so I can't find the reference right now, but trust me, it's here somewhere!
Posted Tuesday, April 22, 2008 0 comments

I spent quite alot of my Sunday cleaning and lubing my bike chain. This is the first time I have done this and it sounds simple, but by doing it slowly and methodically, I think I did it right and put everything back together correctly. Yes, I know I can do this with one of those chain cleaners while the chain is on the bike, but this is a "once a year, clean everything"...

Here it is in gruesome detail (thank your lucky stars I didn't think to photograph each stage):

Now I wonder if I shouldn't have just taken the bike in to the shop and asked them to do this. Maybe next year.

PS: Yes, I helped with the Passover cleaning, too! 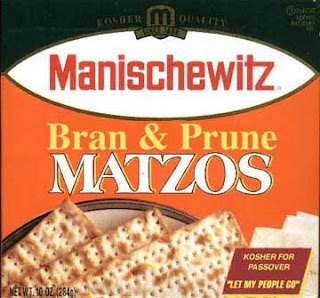 For those who don't know ... Passover food is well known to have a lower fiber content, and so jokes like these are perennial. For the GI inclined, this brings new meaning to the term "Passover prep".
Tip of the hat to Jason Glasgow for passing this along.
Posted Tuesday, April 08, 2008 1 comments

Parkma is what you have if you can find a parking space in places where they are rare.

With a bike (even a recumbent) and a good bike lock, everyone has parkma.