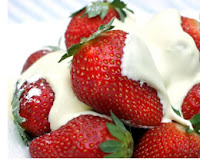 My friend Gregg Stern is an academic, and so when he asks a question, he wants to get to the real answer ... and no fudging. I had noted, after my posting on conventional strawberries and their pesticide load, that he asked me "How unhealthful are the pesticides that are on the conventional strawberries?" My answer referred to an article in WebMD noting how those pesticides definitely found their way into people (available here for the curious).

I then received another email from Gregg, noting that the article also said "the researchers didn't probe or note any health problems in the kids on either diet". Gregg asks, very reasonably, and very scientifically (not bad for a historian):

I have little doubt that "pesticides are bad for you and even more so for your kids," but much how so?

Surely we might avoid, but ought not shun, everything that is bad for us -- such as living in the city as opposed to the country -- but only those things whose potential harm is sufficiently great as to warrant the cost of shunning them.

Pesticides are regulated in the USA by the Environmental Protection Agency (EPA). The EPA regulates them because they are toxic (almost by definition - they are designed to kill animals). So I wondered if the EPA has data on how toxic they are. It does. Here is (I think) the motherlode of answers to Gregg's question.

I believe this a question of cost vs. benefit. Is the (higher) cost of organic food worth the benefit of reduced pesticide exposure. The pesticides on conventional strawberries fall inside some safety limit set by the EPA. The EPA believes that the number of people getting sick from these levels of pesticide are low. How low is low? Here is a quote from an EPA report on acetochlor on lifetime cancer risk (over a 70 year lifespan):

The estimated dietary (food and drinking water) cancer risk for the general U.S. population was 8.40 E -7, and was below the Agency’s level of concern (1 E -6).

This means the agency sees a risk of one in a million as being of concern, and for this chemical the risk is a little less than that. However this does mean that they would not be concerned if you could prove that one in every two million people got a cancer from this chemical over their lifetime, and they actually believe that such a number is possible. So how much would you pay not to be one of those people? This is just one chemical, and I assume the risks are similar from others, so lets say there are just 10 such risks in our lives - one in every 200,000 people will get a cancer from these pesticides over their lifetime. If there are 100 such risks it would be one in 20,000.

Finally, on this analysis, we come back to the "dirty dozen" of produce, in which strawberries always feature. The EPA analysis is an average across the entire food chain and across the entire population. If strawberries, and other dirty dozen produce, has more than average amounts of pesticide, then by choosing to buy only organic for those cases has a particularly positive benefit. I imagine the side benefit of reducing exposure for farm workers and their families must be considered a charitable effort on my part.

I do many things to protect my family from unlikely events ("don't have a bath when there is a thunder storm"). I am prepared to pay more for organic on the basis that I may dodge this particular bullet. In my case the analysis is whether, by paying more for organic food, I am forgoing a more potent health benefit (remember, Gregg asked how much it costs to shun the pesticides). If by spending on organic food I am not buying other things that confer greater health benefit (proper clothes, good nutrition - organic or not, bicycle helmets, armored Humvees), then this is the wrong decision. If this extra spending does not displace better use of the money, then it does have positive benefit, at least by my calculation. Others (including the EPA, I assume) disagree with me - at least statistically.

Obviously I do not choose to spend money on eliminating certain risks, perhaps larger risks. In that regard I am irrational. I also do not choose to eliminate all pesticides (we still buy some conventionally grown produce), so I am even more irrational. As a pedestrian, or as (dare I say it) a cyclist, I introduce far higher risks into my life than a 1 in 2 million chance of a cancer from this or that pesticide. However, the current question is not about whether I am consistent, logical or rational. (Feel free to ask that question later.) The question is whether I am forgoing other benefits because the extra cost of organic strawberries precludes me from doing so.

So what do you suggest might be other things I am forgoing because I am spending more on food?
Posted Wednesday, March 21, 2007 0 comments

For those who know the Israeli music scene, I am sure you know Gidi Gov and Danny Sanderson. I know some of their music, but not a great deal ... as I found out when I went to hear them (and friends) play downtown in Boston on Sunday evening.

It is not yet Spring (nearly, the calendar tells me), and the snow still lies white on the ground, but I had my first cycling dream of the season and, no, I did not fall off. I am getting excited to live the cycling part of Venture Cycling again.

I actually put on most of my cycling gear recently - my costume for Purim (known, in short, as the Jewish version of Halloween).

One reason for my cycloptimism (that's cycling optimism, not one eyed optimism) is that, despite the snow, you can feel the Spring is coming, and I am starting to think about a checklist for getting riding again:
Another reason for this feeling of impending cycling is that I am now signed up for the 2007 Hazon NY Jewish Environmental Bike Ride, as is Hannah. This is happening over Labor Day weekend. If you are in the Boston area you are invited to a no obligation information session about the ride, next week (Monday 3/26, 7pm). Contact me (richard@sigmapartners.com) for details.

Another Richard, Another Venture Cycling Analogy

Thanks to Brad Feld's recent posting I found another Richard with a Venture Cycling analogy, albeit just in passing.

Brad pointed me to Dick Costolo's posting for entrepreneurs on whether there are too many companies (and all those other reasons) getting in the way of doing that startup you are itching to do.

Brad picked up the last few lines from Dick:

After my recent post on Billion Dollar Strawberries I got two great replies from friends.

Gregg Stern asked me, "How unhealthful are the pesticides that are on the conventional strawberries?"

By the way, what does "redux" mean: Brought back; returned (thanks, answers.com)

The other day my wife, Dorit, came home and said "no billion dollar strawberries for us this week." We have recently decided only to get organic strawberries, because they are on the dirty dozen list.
There are many versions of the "dirty dozen" list of fruits and vegetables out there ... these are the lists of produce that have significant pesticide residue even if you wash them. The suggestion is that you can focus your organic purchasing on these products to get the best bang for your green green (green=organic green=money, get it?).

Strawberries ALWAYS make it onto this list. They, like other berries, suck up what is around them and on them, and have, apparently, higher pesticide residues.

No billion dollar strawberries this week, or any other week... I guess.
Posted Wednesday, March 14, 2007 0 comments

Soon after my last posting on the next food revolution, I saw that Time magazine had its cover story on exactly the same topic: "Forget Organic, Eat Local."
Posted Saturday, March 10, 2007 0 comments