Sometimes I love being wrong. Fifteen months ago, here, I suggested that by 2018 the cost of obtaining a complete human genetic sequence would decline to the $1,000 level (the first one cost $3 billion).

Now, reading this MSN article, I see the true cost of a genetic sequence has already dropped to around $5,000 (look near the bottom of page 2 for this tidbit). The $1,000 sequence is now within sight, probably by the end of next year I have to guess, and possibly sooner. At this price point we will reach the tipping point, and there will be a flood of genetic data entering our healthcare system, and this can only be helpful. As reported in The Times of London, for example, DNA scan could cut cost of insurance - even if results kept secret.

We should remember that this is not yet a straight line to perfect diagnostics and treatments, because (as I reported in April) the connection between specific genes and disease is becoming less clear right now, not more. However, the availability of massive amounts of genotype data (genetic sequences) linked with phenotype data (what is happening to these bodies, as recorded in EMRs) will likely change medicine more rapidly over the next 10 years than over the last 50.

The incidentalome looms larger than ever.
Posted Tuesday, July 07, 2009 2 comments

The Cyclist’s Guide to the Galaxy 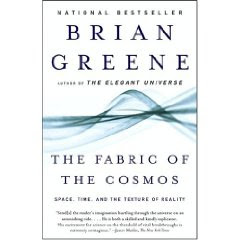 I recently read Brian Greene’s The Fabric of the Cosmos, in which Greene describes, in lay and non-mathematical terms the major themes of physics and cosmology. Catapulting from the classical physics of Newton, Maxwell etc, Greene launches first into relativity, then quantum mechanics and on into inflationary cosmology and string theory. His style is engaging, even entertaining, and, nonetheless, very informative. I even know why the physicists of the Large Hadron Collider in Europe are chasing after the Higg’s Boson and what it is, more or less.

As a cyclist, all this has direct and immediate consequences. For example, and with a tip of the hat to Douglas Adams, if we live in an 11 dimensional universe should a bicycle have more wheels?

My favorite diversion born of these considerations tells me that as well as the health benefits of cycling, the relativistic effects of riding are also keeping me younger than any stationary types. This is based on Einstein’s theory of relativity which notes that the clock of someone travelling at speed will run slower than the clock of someone stationary. I posited this when out cycling with friends on Sunday, cleverly within earshot of Kenny Breuer, a professor at Brown University, and a regular in our Sunday morning cycling group. Sure enough he rose to the bait.

On one leg (or two wheels), he suggested the following approximation, to within an order of magnitude (meaning we are only using numbers that start with a 1 and have some number of zeros – like ten, a thousand, a billion, or a tenth or a thousandth etc). As an example, and introducing scientific notation for very large and very small numbers, the speed of light is 3E+08 meters per second (spoken three times ten to the eight, or three times ten to the eighth power). This is the notation for three times the number 1 with 8 zeros, which equals 3x100,000,000 or 300,000,000 m/s. To within an order of magnitude, this is simplified(!) to 1E+08 (we ignore the 3 altogether as you are about to see). 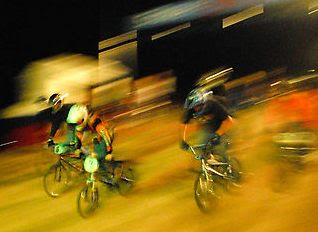 Kenny assures me the relativistic effects are the square of the fractional speed, so the relativity impact is the square of 1E-07, meaning 1E-14. If we are riding at this speed for three hours, then this is approximately 10,000 seconds (or 1E+04 seconds). Hence the change in our clock, compared to someone stationary, is 1E+04 times 1E-14 or 1E-10 seconds. This is one tenth of a nanosecond, and as anyone who works in computers knows, nanoseconds add up. One thousand nanoseconds is a millisecond, and everyone notices when there are more than a few milliseconds of delay on a Skype video call.

I know the approximations overstate the results (the speed of light is faster, we are travelling slower), but being able to do the simple exponent-of-ten math while cycling makes up for the lost accuracy with warm feelings of satisfaction.

I was hoping Wolfram Alpha would be able to provide a complete schematic for confirming this calculation, and I typed in relativistic effects on time of travelling at 14 mph for 3 hours. Unfortunately it did not understand me. Surely this kind of thing is a commonplace(!)
Posted Sunday, July 05, 2009 1 comments