VC:VC Can I offer you a euphemism?

The very excellent Blue Avocado non-profit website and newsletter, issue 56 (with an excellent article on Board-Staff agreement over financial governance), offered this to “decode the code”:

· Bright means . . . young and well-educated. "Will you do an informational interview with my cousin? She's very bright."

· Seasoned means . . . old. "Will you do an informational interview with my cousin. She's quite seasoned."

· Good reputation . . .  they don't have money troubles: "I want to work for a nonprofit with a good reputation."

· Strategic (from a foundation) . . . less responsive to nonprofits: "Our ten-month planning process has resulted in a decision that our grantmaking will be more strategic."

AND ITS EXACTLY THE SAME (just insert CEO for Exec Director, VC for foundation, investing for grantmaking, etc).

There are many kinds of database

Bob Metcalfe always used to say there are just two kinds of network: Ethernet and Ethernot. He was commenting that any network not based on Ethernet was going to end up losing to Ethernet in the marketplace. With the demise of AppleTalk (Apple), Token Ring (IBM) and DECnet (Digital), he was more or less proved right.

Bob has an axe to grind, as one of the co-inventors of Ethernet, but that doesn’t make him wrong. This is not Metcalfe’s Law, coined by the same Bob Metcalfe, that the value of a network increases proportionally with the square of the number of participants. Perhaps I can call the Ethernet/Ethernot comment Metcalfe’s Hypothesis (not all his predictions were correct).

Sigma’s investment in Gainspan is a bet that Metcalfe’s Hypothesis will continue to be right, this time with respect to Zigbee and other approaches proposed for sensor networks.

The database world has been dominated by the relational database model for many years, and all the famous commercial databases such as Oracle, Sybase, IBM DB2, MS SQL Server and open source MySQL are relational database management systems (RDBMSs). The relational data model referred to can be thought of as tables of data which are related to each other (like a table of bank accounts is related to a table of banking transactions). These systems are also known as SQL databases because they use Structure Query Language (SQL) for programming, and SQL was created for RDBMSs and is an absolute standard for their use. Separate from the data model and the language to talk to the data, RDBMSs are mostly expected to be able to manage transactions properly (and be ACID compliant). Simply put, this is the capability to ensure that, for example, a money transfer is properly recorded in both the sending and receiving accounts, and making it impossible to record only one side of the transaction without the other.

Now there are a new gang of databases in town, and they have gathered themselves together under the “NoSQL” banner. These are clustered around BigTable and Hadoop technologies made famous most notably because of their Google-related provenance.

Many (most? all?) NoSQL databases do not have transactional or ACID capabilities, and don’t seem to need it, at least for now, because the use cases that prompted their development really are that different. NoSQL databases are not gaining popularity because they are better at the same things as an RDBMS. This is not about more or faster money transfers. This is about new problems which don’t need transactional integrity and do need to analyze data sets bigger than an RDBMS can economically manage (or manage at all). Sigma’s investments with Michael Stonebreaker (see earlier post) are, in many ways, bets on the future of multiple kinds of databases flourishing.

So I am tempted to postulate Dale’s Hypothesis, somewhat in opposition to the idea of Metcalfe’s Hypothesis, that there can be many kinds of database, and you don’t need SQL to have a sequel.

Is a VC letting you eat your lunch?

By the way, whoever gets to eat lunch, if the VC doesn’t pay for it, don’t take their investment… But that is a topic for another blog posting.

Consider this: you are having lunch with a VC. The truth is if you are lucky, you won’t get to eat yours. The VC will be listening intently, asking good questions, and leaving you the time to answer fully and clearly. He or she will be chomping away, listening hard, but enjoying the food and filling up nicely. On the other hand, every time you take a mouthful the VC will ask another question and you will have to stop eating to answer. (Hint, choose something to eat that doesn’t take too long to chew. Soup, anyone?)

Why most computer programs suck 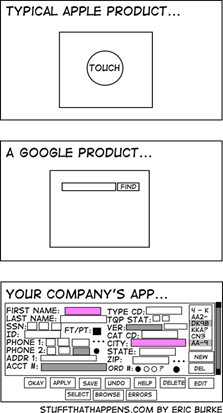