A while ago I wrote about multitasking, why it’s bad for you and that I was going to stop doing it.

Well, as soon as I have finished writing this blog post, listening to this podcast, answering the phone and finishing off breakfast I will stop multitasking.

I don’t think I can stop entirely, however. Like many, I find I need to do something else while on telephone conference calls. Early last year there were several reports (e.g., Time) that doodling helps you pay attention, and hence justifies some small niche for multitasking.

In a similar vein, when on the phone for an extended call, I find myself playing with my kids’ lego blocks, and recently I am also doing jigsaw puzzles. I find these activities lead to no reduction in focus on the conversation (unlike doing email). I think this works because neither endeavor taps into the part of the brain needed for language. There is no semantic processing involved in legos or jigsaws. It is all about spatial and visual patterns. My own anecdotal experience is that this doesn’t distract me from listening or speaking at all.

About this time last year I published a post about The Anatomy of Hope by Jerome Groopman. The book delved into the interaction of mind and body, and the real, scientifically observable phenomena which cause real healing (or suffering) in the face of placebo triggers. As you can tell, I am fascinated by these topics, and their interplay with the business of healthcare.

Knowledge in healthcare is about conducting scientific experiments, studies and clinical trials. There are well known formulations and standards in research, including statistical testing, which must be used in order to say we know something about a condition, a disease or a treatment. For example, what do you think the scientific consensus knows about the medical effects of radiation related to cell phone usage? Score two points for knowing the scientific consensus is that there is NO evidence of harm. Score two extra points for knowing that there is now one scientific study that may have uncovered beneficial effects related to Alzheimer’s (as reported by Reuters). Knowledge is often unexpected, but it turns out it is not even as simple as that. The nature of knowledge in this field is much less concrete than we would like.

Good friend Ted Kaptchuk once told me that he studies the nature of scientific knowledge, and that whatever is encapsulated solely in the clinical trials paradigm is sorely lacking. In 1998 The Annals of Internal Medicine published one of his papers The Persuasive Appeal of Alternative Medicine about these themes. In the abstract he states

It may be that independent of any such efficacy, the attraction of alternative medicine is related to the power of its underlying shared beliefs and cultural assumptions. … These themes offer patients a participatory experience of empowerment, authenticity, and enlarged self-identity when illness threatens their sense of intactness and connection to the world.

Although Ted had more than an instinctive understanding of the power of participation, that word “participatory” has taken a while to show up in the mainstream healthcare world. Personal Health Records (discussed here), like those from Microsoft, Google and others, are all about patient participation in their own health care. Leroy Hood of the Institute for Systems Biology is giving a talk at the American Association for Clinical Chemistry 2010 Annual Meeting entitled The "4P" Healthcare Approach: Predictive, Personalized, Preventive and Participatory. Participation has arrived. Why?

Last August, Wired Magazine published an article Placebos Are Getting More Effective. Drugmakers Are Desperate to Know Why (tip of the hat to Guy S for sending me this one). In it we discover that “the placebo effect is somehow getting stronger”. A more recent Ted Kaptchuk study is quoted showing the efficacy of placebo treatment, and suggesting that this be harnessed in our healthcare system (rather than used just to screen out ineffective treatments). It turns out that our level of knowledge about medical treatments changes our susceptibility to the placebo effect (which is why placebos are getting more effective). This article concludes that the statistically determined efficacy of a new drug treatment is related to the education level (and cognitive functioning) of the population on which it is tested!

Assumption number one was that if a trial were managed correctly, a medication would perform as well or badly in a Phoenix hospital as in a Bangalore clinic. Potter discovered, however, that geographic location alone could determine whether a drug bested placebo or crossed the futility boundary. By the late '90s, for example, the classic antianxiety drug diazepam (also known as Valium) was still beating placebo in France and Belgium. But when the drug was tested in the US, it was likely to fail. Conversely, Prozac performed better in America than it did in western Europe and South Africa. It was an unsettling prospect: FDA approval could hinge on where the company chose to conduct a trial.

This is not just about treatment. In the book review for 59 Seconds by Richard Wiseman, the Wall Street Journal reviewer notes quotes "people exposed to fake poison ivy developed genuine rashes, …" This book shows that harnessing the power of the mind can lead to real physical results in all sorts of ways.

A certain geeky group used to joke with each other about the quantum mechanics phenomenon of the observer changing the reality of what they are observing. The joke is in imagining effects that occur at the sub-atomic scale might directly impact the world we see and experience (of course, as “everyone” knows, this particular quantum effect does not scale up) – funny, huh?!

Such jokes are no longer funny even to the geeks, because mind body effects are no longer just hippie imaginings – they are the stuff of mainstream science. We have found that the human mind changes the world of the individual in very real and meaningful ways. More than that, this effect is universal enough that it effects the conduct of clinical trials, and hence changes the nature of scientific knowledge. The very standard by which we judge whether a treatment is effective is fluid enough to be, possibly, useless!

Before I finish, let me point you to another problem in our scientific knowledge documented in British Medical Journal article How citation distortions create unfounded authority: analysis of a citation network by Steven Greenberg. The article shows that even if the standard approach to scientific experimentation is able to withstand these complexities, the mechanisms of disseminating knowledge in the scientific community, peer reviewed articles citing and building on previous articles, are subject to arbitrary human biases. Since citation analysis (seeing how many times another paper is cited) influences future citations, this can lead to a pernicious (even if not malicious) distortion of the truth.

In summary (along the lines of the famous “the future ain’t what it used to be”), I guess I knew a lot more about knowledge before I knew so much about knowledge.

Graphics that tell a story

Graphics, well done, can tell stories with wonderful clarity. If you are not familiar with the work of Edward Tufte in this area, you should be.

Take this chart from National Geographic, discussed eloquently by Andrew Sullivan in The Daily Dish from The Atlantic. Don’t tell me the US healthcare system doesn’t need fixing after you look at this! 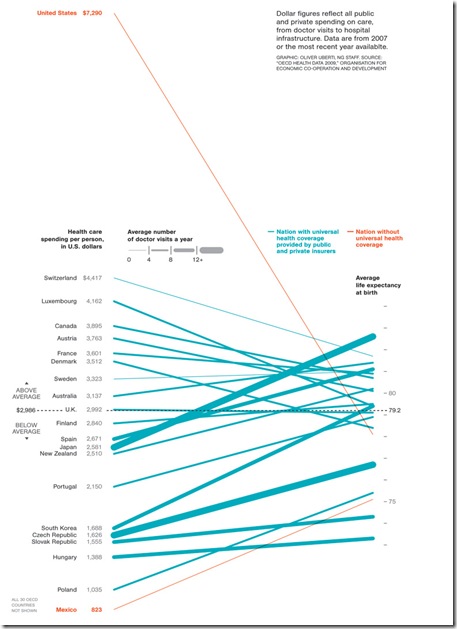 This one is less serious in nature, picturing the past 10 years, and worth clicking through to the NY Times to see in its full resolution. 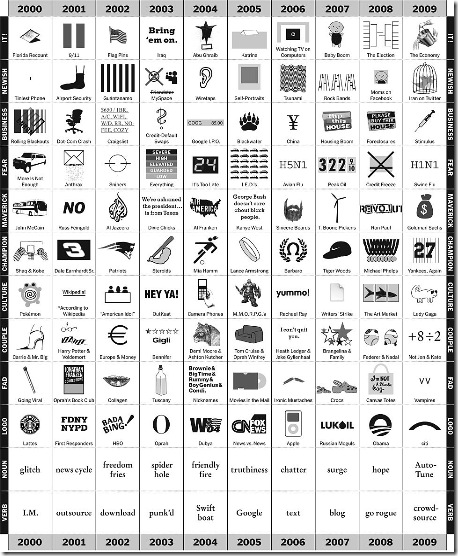