Why Google should buy RIM

Google should buy RIM, makers of Blackberry smart phones, and this is why.

Everyone who uses Blackberry phones loves the physical form factor, especially the keyboard, and this means the phones are great for email. The famous security adds to this, and makes enterprises and even governments happy (or unhappy, if they like eavesdropping). People also love BBM (Blackberry Messaging service).

However, that's it. Everyone hates the Blackberry browser, the other apps, the integration etc. In my view (and not only in my view I think) RIM is on a slow decline, despite their new tablet and touchscreen phones.

Google is looking to extend its platform to everywhere. Put the two together, and you have a great combination.

Google could get the patent portfolio to allow them to use (or better, out-license) that great keyboard, instead of the crappy one on, say, the Motorola Droid slide-outs. Google could even choose to spin off the hardware altogether to a handset manufacturer (HTC?), to reap the benefits of getting Android onto the platform but avoid competing with their channel.

Google could leverage the intense loyalty of BBM across it's entire messaging line, adding to Gmail chat, etc. Google could add the great enterprise security that Blackberry has. The BB phones would probably enhance the relationships Google has with the mobile carriers, although I am not sure how important that really is. Google would be able to put Android on the BB platform which would make current BB phone users very, very happy.

That's it... Any comments?
Update: Check out a TechCrunch post that points in this same direction (or certainly points out BBM is in for a steeper decline), punchline “New BBM feature: f**ked.”
Posted Tuesday, June 14, 2011 4 comments

A few weeks ago I talked about raising an investment for your startup in terms of finding a way to score 100 points with investors in a game with no fixed scoring.

Since then I was pointed towards a great article on Quora, worth reading, on How to Communicate Traction to Investors. Getting this right is certainly a key foundation to point scoring.

Inside a CEO’s drawers

Generally it’s a worry when an investor wants to look over the CEO’s shoulder, calling and emailing all the time: “how’s it going?”, “did you close any sales this week?”, “what’s the status of the top 25 product bugs?” This is known as getting in your CEO’s pants, meaning being so close as to be very uncomfortable and a little inappropriate (and, heaven forbid, nothing more than that).

Sometimes, however, there is a moment when getting in a CEO’s drawers is quite illuminating, and by drawers I mean office furniture … not clothing! 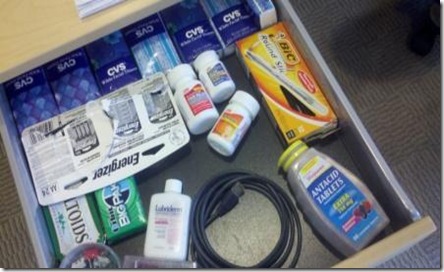 Take a look at this picture I took of the contents of the top drawer of a well-respected startup CEO in the Boston area. What does it teach us about the life of a CEO?