I got to listen to the Radio Lab program on my way home from a meeting last night on my local NPR station, WBUR. The final segment discussed the limits of human knowledge in science, and in particular the possibility that humans might reach limits of insight especially when scientific discovery is computer-aided.

As reported, a computer program called Eureqa was able to independently discover Newton’s law F=ma just by watching a double pendulum for a day. With input from a completely different field, it then discovered some rules by which simple cellular mechanisms work. These rules seem to be correct, because they accurately predict what will happen in the cell. However, as scientists look at those rules, they are at loss to understand them. They have no insight as to why the rules are correct.

You can listen to the segment and see the comments here.

At 8:05 into the segment, the hosts say that the scientists are “in this awkward position where they’ve got the answer, but they don’t have [pause] the insight.” And in that pause, all I could think was they would finish the sentence with “the question” … as in “they’ve got the answer, but they don’t have the question”. And why would I think that? Because of Deep Thought, Hitchhiker’s Guide to the Galaxy, and the answer to the meaning of life, the universe and everything. Douglas Adams fans (like me) know what I am talking about, and others can read about it here. I was gratified to see the comments on the Radio Lab website went exactly to the same thoughts.

The folks at Techstars Boston have a grainy photocopy of this image on the wall, and so when I saw John’s posting (I especially like the video he references), I realized I had to post this taxonomy to support the Dweebs among us. 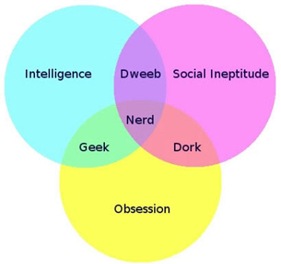 The tech industry is full of people with these characteristics, and perhaps these are key ingredients in technical or entrepreneurial success.