Biking by the sea 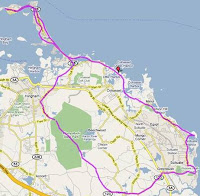 As promised yesterday, I drove down to Hingham and went for a fabulous ride by the ocean with my daughter Hannah. Here is a graphic of the 30 mile route we covered ... click here, or on the graphic, for a link to the route on Bikely.

This was inspired initially by looking at Ride 22: Cohasset Coastal Ramble in Road Biking Massachusetts by Tom Catalini, with variations derived from this existing Bikely route from user jba.


Here are some photos taken by cell phone camera.

A tip of the hat goes to Jason Glasgow who pointed me to this Wall Street Journal article about biking trouble in San Francisco. An activist there contends that bike lanes restrict auto traffic and hence increase congestion which in turn increases pollution from longer trip times and more time idling while stuck in traffic. Hmm...

Compare that to Tom Friedman's recent NY Times op-ed noting that in Copenhagen, Denmark "... you knew it was rush hour because 50 percent of the traffic in every intersection was bicycles." The piece was about Denmark's response to the 1970s oil crisis that has resulted in the country becoming energy independent.

I think I previously mentioned the interesting math (discussed here) that, traffic jams aside, cyclists do not save carbon or other environmental burdens because, being healthier, they live longer and consume more energy in the home, at work and elsewhere in those extra years.

All in all, it was never as simple as we had all wanted it to be, and grandstanding on the issue without being prepared to face well-formed scientific questions will help no-one.

On that note I am planning to put my bike on my car and drive for an hour to enjoy a serene, nature-loving, seaside bike ride. How's that for environmental footprint? 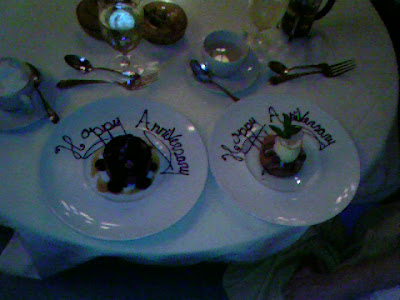 Last night Dorit and I celebrated our 20th wedding anniversary with a celebratory dinner at Mistral in Boston.

A note in the reservation on OpenTable asked for a romantic table for our anniversary dinner. They put us at a corner banquette and we sat close, like newly-weds, and reminisced about our life together when we were newly-weds. That note also produced the "Happy Anniversary" notes on our dessert plates.

It is easy to be sappy at these moments, and my emotions all fall into that category. It has been an amazing twenty years, and I look forward to at least 40 more.
Posted Friday, August 08, 2008 2 comments

Back on the chain gang

I got my bike its annual tune up last week at Wheelworks. I mentioned my gears were slipping but they don't seem to have fixed this yet. I am wondering whether I just need to get a new chain (like last time). Yes, I measured the chain, as did the mechanic, and it seems fine. Since it is three times longer than a chain on an upright bike, the individual links only get hit with the stress of the cogs a third as much (which means you get three times the life out of it). I have ridden about 1500 miles on this chain which should be good, therefore, for at least another thousand. However it is a cheap fix and one I may pursue.

It was about this time last year Lee Goldfinch first got a mention on this blog ... and how times have changed! Lee is now a very strong cyclist and out ahead of all of us when he wants to be. He has become a regular member of the riding group and it is great to find a shared pastime brings such pleasure and such opportunity for strengthening friendships. We were chatting yesterday, and I found myself thinking of Bob Dylan songs that speak to cycling... here goes (and please add yours in the comments):

Oh yes, and thanks to The Pretenders for the title of this post.