I have written a few times about the coming of the $1,000 genome, and what that really means.

I recently read an excellent Forbes article by Jim Golden that argues this is already rather old news. We are apparently close, if we haven’t already arrived, at the mechanical capability for sequencing a whole genome for that price in a few hours. However, to sort through the data we generated for $1,000 and get reasoned clinical knowledge for a patient still costs $25,000-$100,000.

In cancer labs (a hotbed of genetic research), the article notes that whole genome sequencing of tumor tissue will need to be repeated multiple times for at least thousands of patients (there are over 1.4 million new cancer cases each year in the US). Repeating the genetic analysis enables tracking the mutations as a patient undergoes treatment and the tumor changes and responds. The next frontier of genomic-based clinical research is not perfect personalized medicine – that is still way off in the future. The next frontier is about having the opportunity to get insight into the patterns of disease progression, treatment and response. Only after we leverage this lower cost of genome sequencing to amass statistically significant amounts of data for all very many different kinds and sub-types of cancer will personalized treatment become a mainstay of clinical practice.

It’s not about the $1000 genome.  It’s about big data generation and analytics for insight creation over the clinical course of a patient’s journey through cancer.

The Four Horsemen of … 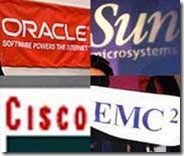 A long time ago, around the time of the dot-com bubble, four companies emerged as the tech powerhouses of their time. Sun, Oracle, EMC, Cisco were known as the four horsemen of the new economy. Sun built the computing hardware, Oracle developed the database systems, EMC provided the storage infrastructure and Cisco powered the networks. Sales boomed, stock prices soared, and fortunes were made. After the bubble burst the term “four horsemen” seemed even more appropriate (the original horsemen were harbingers of the apocalypse). Sun never recovered and is now owned by Oracle which continues to thrive. EMC reinvented itself by adding sophisticated document management, security and virtualization technology. Cisco is most closely still like itself. Still, despite the gloomy associations, it appears that people like this four horsemen metaphor.

According to this post, the four horsemen of cloud computing are Amazon, Microsoft, Google and VMware.

I can’t seem to find anyone else’s view for four horsemen of big data, so here are my picks: IBM (Watson won Jeopardy after all), Google (organizing the world’s information), Apache Hadoop (big data’s favorite open source project right now), and Twitter (400 million tweets per day represents the global rush of random data about everything).

What are your picks for the four horsemen of big data, and why? You have to choose a list of four – more or less is cheating! Answers in the comments please.