No-one was quite sure what Web 2.0 was when the term was first used. Did it refer to the technology behind Google Maps? This revolutionary approach allowed the server to update the browser as you dragged your cursor around the map, without having to press Submit to get a new response. Did Web 2.0 refer to user generated content such as blogs and wikis (and much later, social media like Twitter and Facebook)? No one really knew then, or really knows now. (Even Wikipedia, at the end of November 2010, is not sure about it, saying in its Web 2.0 article “This article needs attention from an expert on the subject.”)

But Web 2.0 was exciting, and indeed the subject of trademark claims. We all knew Web 2.0 was not Web 1.0 (which only existed as a counterpoint to Web 2.0 – no-one used Web 1.0 before Web 2.0 was coined). Web 1.0 was the old web, the static web pages, boring forms with submit buttons – nothing changed unless the whole page changed, and basically you read Web 1.0, and someone else wrote it. Web 2.0 was exciting because it was dynamic, and maybe even you helped write it, even if we didn’t know exactly what it was.

Then someone coined the phrase Web 3.0. This is never really caught on except with uber geeks, and I think it refers to semantic web technologies, where computers can read online data and make sense of it. The whole march of 1.0, 2.0, 3.0 then seemed to peter out.

Until now that is … Apparently the Marketplace Economy blog is called “Economy 4.0”. There is just too much wrong with this to spill ink (or bits) on it. Just don’t let me catch anyone doing anything 5.0.

Email ThisBlogThis!Share to TwitterShare to FacebookShare to Pinterest
Labels: Opinion

What the hell does a VC do (NSFF)?

Usually you see NSFW, meaning Not Safe For Work (don’t open the video if at work in case it gets you in trouble). I choose NSFF meaning Not Safe for Family because your work site can probably handle a couple of f-bombs, but you may not want your kids to hear it.

It turns out that VCs spend lots of time listening to jargon laden pitches which we barely understand, and this seems to be the case particularly acutely in the advertising technology world. 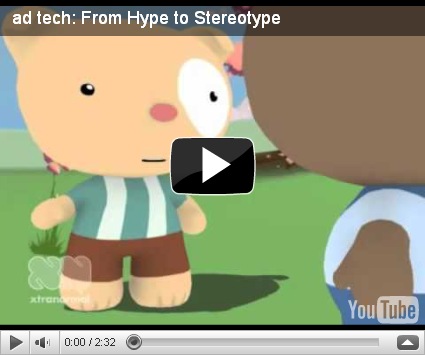 Click for the YouTube link if this isn’t showing up in the blog feed for you. Hat-tip to Brad Feld, for bringing this to my (and the world’s) attention.