The Pace of Change

Things have happened so fast going from zero to global wired and wireless internet in such a short time, haven’t they? (Netscape IPO, August 1995). The music industry has been experiencing its death throes over the last short while, too, right? (iTunes Store opened April 2003). Smart phones took over the world in no time at all, as well, didn't you notice? (Blackberry released 1999, iPhone January 2007 - that’s four years!)

You get my point. We all think, and in many ways quite justifiably, that all this new tech has taken over our lives in no time at all. However, really it has taken several, or even many, years.

In the venture capital world we observe that things always take both longer and shorter than we expect (or experience in retrospect). It has taken forever to get a self-driving car, and recently we have seen the DARPA Grand Challenge and the Google car, both of which are really only concepts. A few high end cars now “park themselves”, but self-driving hasn’t really happen yet. When it does it will feel like it happened overnight. (And as I type this I hear a commercial for the very affordable Ford Focus which now has this self parking feature… that was fast!)

I have been blogging sporadically about the approach of the $1,000 Genome (bringing the marginal cost of sequencing an entire human genome down to below that price). That phrase itself ($1,000 genome) is a few years old already, and the Human Genome Project itself was first completed about a decade ago. Although we are getting close to large labs bringing the cost down to the magic number, the real revolution will be instruments in your doctor’s office accomplishing this, on-demand. That is not yet on the horizon, and it will take longer than we think based on recent progress, but when it happens it will also feel like it was overnight and will accelerate major changes in healthcare very quickly.

Green technology adoption cycles have the same contradictory feel about them, despite complex concerns about investments from VC firms in the field.

Synthesizing all these examples brings us back to this realization that technology driven shifts really do take longer and shorter than we think. The very fast moving Location Based Services arena (think FourSquare) may not change much for a few years now as the market catches its breath and works out where the impacts are most meaningful. In the end, our experience of feeling this burst on us very quickly will be tempered by the reality that it will have taken a while to settle.

We, as investors, can take comfort from this because the windows of opportunity are longer than we fear. This is tempered by concern about placing bets too early or committing to spending on ramping up sales efforts before the markets are really ready.

Today marks the beginning of the 2011 biking season for me. I am looking forward to a 20+ mile ride a little later today.

It has been a few weeks since my last blog post, and given that my biking and blogging have been intertwined since the beginning, it is fitting for me to show up here again as well. (Look at the name of the blog!)

Next weekend is Purim, the Jewish holiday where kids (and adults) get dressed up … so spare a thought to parents of the celebrity obsessed. 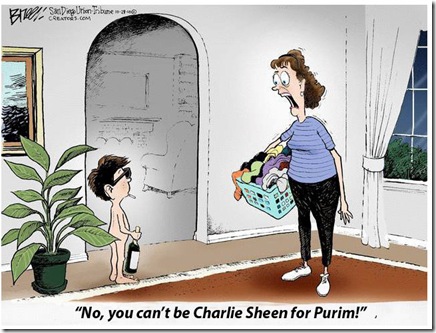